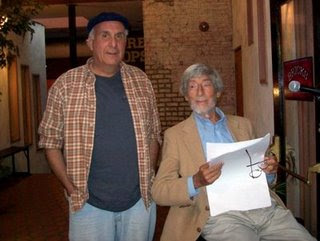 Hearing David Bromige Speak His Own Words Once Again

this morning early on in June

Tonight as I attempt to sleep

the wind chime outside my bedroom window

once again and endlessly recites. 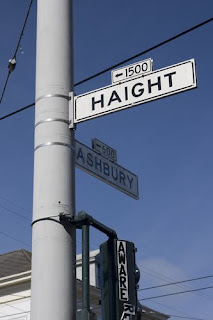 Catherine Sevenau, a Sonoma, California writer follows Rick Posner's poem "1967" with her own powerful memoir from the following year. After you read this short piece, you might consider stepping up to the plate with something (any medium at all) about 1969?


1968: Positively Haight Street 1968 was the year Eldridge Cleaver published Soul on Ice (he and his wife Kathleen banked at my teller window and had the biggest hair I’d ever seen). 1968 was the year of the SDS, the Yippies, and the Black Panthers. 1968 was the year Martin Luther King was shot in Memphis, sparking riots across the nation; the day after his death hundreds of black kids from Poly High rolled down Haight in a tidal wave—smashing storefront windows and overturning cars. It was the year of sweeping anti-war protests, the Tet Offensive and the My Lai massacre—the year the Viet Nam war ripped our country inside out. It was the year Bobby Kennedy was assassinated by Sirhan Sirhan, the year of the Democratic National Convention and the Chicago riots, the year women were branded as bra-burning feminists. It was the year the Summer Olympics in Mexico City were boycotted by thirty-two African nations, the year Apollo 7 and Apollo 8 were launched, and the year Richard Nixon was elected.

I existed in the eye of this turbidity—not oblivious—but neither overly concerned nor connected to the world's chaos. Dressed in my starched white button-downed-collared blouse and my navy blue A-line skirt, wearing pantyhose and white flats, Coral Sea lipstick and a helmet-head Summer-Blonde flip, I watched with detached interest the swirl of humanity through the plate glass windows of my dad's five-and-dime where I had worked every summer since I was 12, and then from across the street at the corner bank before I married in ‘67.

In my world, 1968 was the year the neighborhood stores closed, leaving empty shells with boarded windows. The regular shoppers were done with fending off grungy panhandlers constantly asking for spare change to feed their mangy bandana-necked dogs. They were tired of stepping over stoned fourteen-year-old runaways who looked like five miles of blank road six days in from Wichita and they'd had it with being hustled, muscled, and rudely rustled by dreadlocked junkies, spaced out punks and blissed-out barefoot bums. The regulars now hailed streetcars to Irving or took the bus over to Market—or moved out of the Haight altogether—no longer willing to deal with the potheads vying for joints, the druggies peddling bennies and black beauties, or the dealers hawking balls of black opium, balloons of heroin and bindles of coke.

1968 was the year Daddy closed the store. The Summer of Love, the riots and the changing times did my father’s business (and my father) in. I find it worthy to note that his history, albeit on a grander scale, echoed the same song some fifteen years before. The sex, drugs and rock n' roll that had then taken him down back then once again cracked my Dad’s foundation and walls. Once again he sold his stock, boarded his windows, and locked his front glass door, and—once again—left town.

1968 was also the final straw for my mother. 1968 was the year she ended her life in a small hotel on Whittier Blvd., closing a chapter on mine.