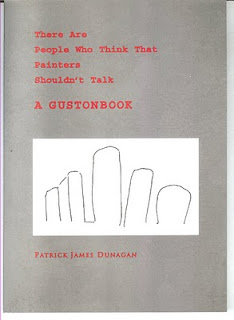 When shit gets petty
get petty
right back

Language is color
the medium resists
***

there are no hierarchies, no infinite, no such many as
mass, there are only
eyes in all heads,
to be looked out of
***

More than
willing
this

happens
to be
just

accrue
of their own
asking

just being here
touching me
other one
here, here
just touch
***

You would be certain
of that brick
***

But is there poetry in money?? Check out Bay Area poet Jack Foley's humorous take followed by that of Big Sur's Henry Miller

“NO MAN BUT A BLOCKHEAD EVER WROTE, EXCEPT FOR MONEY”

why would you want to

if you didn’t want

to make money from it

why would you put

if there were no money

in the opera written

to be got out of it

in the hope of gaining

why would you want to

if you didn’t want

you gotta eat don’t you?

to make money from it

“consider the lilies of the field”

why would you want

not everybody has a heavenly father

to paint a picture

or as we say in the theater

why would you want to write a song

(are you crazed? do you think you’re a bird?)

or golly a sugar mommy

if there were no money in it

or even a sugar nephew

why would you want

don’t be a diabetic sweetie

to do anything at all

to put in your coffee

why get thee out of bed

before you get put

why make something beautiful

so go out there swinging

if you don’t want

but don’t be too bohème honey

when you show em your legs

(gimme the coin I want that sweet)

make sure they show you

you want to be kempt

if you couldn’t anything

but you gotta be “kept”

why would you money

“better to go down dignified

“with boughten friendship at your side”

money if you money

a poet said that and he made lots of it

I have no money, no resources, no hopes. I am the happiest man alive. A year ago, six months ago, I thought that I was an artist. I no longer think about it, I am. Everything that was literature has fallen from me. There are no more books to be written, thank God. This then? This is not a book. This is libel, slander, and defamation of character. This is not a book, in the ordinary sense of the word. No, this is a prolonged insult, a gob of spit in the face of Art, a kick in the pants of God, Man, Destiny, Time, Love, Beauty

To walk in money through the night crowd, protected by money, lulled by money, dulled by money, the crowd itself a money, the breath money, no least single object anywhere that is not money. Money, money everywhere and still not enough! And then no money, or a little money, or less money, or more money but money always money . and if you have money , or you don't have money, it is the money that counts, and money makes money, but what makes money make money? - Henry Miller

When I read this, I wondered what poet could live without it. Then, putting it on here, I couldn't imagine abridging it. However, since it's "longish," I'll provide it's beginnings here and add a link to the full essay. Do yourself a favor and read the whole thing!

Poetry and Ambition
by Donald Hall

1. I see no reason to spend your life writing poems unless your goal is to write great poems.

An ambitious project—but sensible, I think. And it seems to me that contemporary American poetry is afflicted by modesty of ambition—a modesty, alas, genuine ... if sometimes accompanied by vast pretense. Of course the great majority of contemporary poems, in any era, will always be bad or mediocre. (Our time may well be characterized by more mediocrity and less badness.) But if failure is constant the types of failure vary, and the qualities and habits of our society specify the manners and the methods of our failure. I think that we fail in part because we lack serious ambition.

2. If I recommend ambition, I do not mean to suggest that it is easy or pleasurable. "I would sooner fail," said Keats at twenty-two, "than not be among the greatest." When he died three years later he believed in his despair that he had done nothing, the poet of "Ode to a Nightingale" convinced that his name was "writ in water." But he was mistaken, he was mistaken. ... If I praise the ambition that drove Keats, I do not mean to suggest that it will ever be rewarded. We never know the value of our own work, and everything reasonable leads us to doubt it: for we can be certain that few contemporaries will be read in a hundred years. To desire to write poems that endure—we undertake such a goal certain of two things: that in all likelihood we will fail, and that if we succeed we will never know it.

Every now and then I meet someone certain of personal greatness. I want to pat this person on the shoulder and mutter comforting words: "Things will get better! You won't always feel so depressed! Cheer up!"

But I just called high ambition sensible. If our goal in life is to remain content, no ambition is sensible. ... If our goal is to write poetry, the only way we are likely to be any good is to try to be as great as the best.

3. But for some people it seems ambitious merely to set up as a poet, merely to write and to publish. Publication stands in for achievement—as everyone knows, universities and grant-givers take publication as achievement—but to accept such a substitution is modest indeed, for publication is cheap and easy. In this country we publish more poems (in books and magazines) and more poets read more poems aloud at more poetry readings than ever before; the increase in thirty years has been tenfold.

So what? Many of these poems are often readable, charming, funny, touching, sometimes even intelligent. But they are usually brief, they resemble each other, they are anecdotal, they do not extend themselves, they make no great claims, they connect small things to other small things. Ambitious poems usually require a certain length for magnitude; one need not mention monuments like The Canterbury Tales, The Faerie Queen, Paradise Lost, or The Prelude. "Epithalamion," "Lycidas," and "Ode: Intimations of Immortality" are sufficiently extended, not to mention "The Garden" or "Out of the Cradle." Not to mention the poet like Yeats whose briefer works make great connections.

Comment or Read Comments Here on any of the above or below. Have you read the full essay yet? Do it, then log in under "Name/URL," (it's easy). Just the name (don't worry about the URL). Actual name is best, but use what you like. Or email me at edcoletti@sbcglobal.net, and I can post it.

thanks for the nod, Ed! & I am familiar with that Hall essay, yep...

Jack is where it's at. He's ready to play with both money and words and in this case money is a word. Delightful. Don't let that ol' money word get you down. When I think of money in poetry or not, I always thing of the Ted Roethke lines:

my favorite poetry money. As for real money, poets do make some, I know about that. As for Donald Hall, yes and no. He is still of the era of the hero and great men, wanting to be one in poetry. What does your muse think of this? Where does poetry lie, in the song or the serious intent? Luci Edwards now back to Friesen

Hi Ed! Your blog gets more stimulating each time out. You make the world a better place too.

Ed, thanks so much for pointing me to the Donald Hall essay. As luck would have it, I've been reading his Selected Poems, which can be had for a song at Treehorn Books. It comes with a CD of him reading, so I was able to listen to him in my car as I wound back to Sonoma on the Bennett Valley Road.

Keep up the good fight,

I rarely read blogs, as I'd rather work on my own writing, but yours has some good material, especially the quotes about earning/not earning money by Robert Graves and Donald Hall's first point about writing great poems. However, if I deleted every poem I've written that is not absolutely great. .